One of the reasons it took me so long to write Old Souls is that when I began I focused on writing sentences instead of writing the story. Writing a beautifully perfect sentence can be an intoxicating idea. But, it’s those perfect sentences that can sometimes distract a reader (and a writer) from what’s actually supposed to be going on in the story. I remember sending a few opening paragraphs of my book to my sister and waiting . . . and waiting . . . and waiting for her to get back to me. (Our family isn’t known for punctuality.) And, when she finally texted me back, she was very polite. 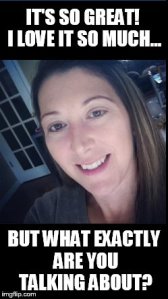 At the time, the book opened with the main character laying on the floor of his apartment, suffering from a combination of withdrawal symptoms after giving up alcohol . . . and his particularly potent brew of antipsychotics. Every sentence was perfect (to me, anyway). I’d spent months writing a paragraph about the way the wind blew through the yellowed lace curtains of his cracked window. But, when those beautiful sentences were put together the story itself was murkier than the water in Winnipeg’s Red River.

In the writing world, some people identify as “pantsers” and others as “plotters,” and I was ready to make a switch, because pantsing was getting me nowhere. I had too many ideas to tame into my sentences. My story is a fairly complex contemporary fantasy, which means that pretty much anything can happen. Love? Sure. Cannibalism? Why not? How about a people who reincarnate over and over along the line of their own descendants? That is an EFFING GREAT IDEA.

I experimented with a few different outlines, including the Snowflake Method and Larry Brooks’ Story Structure. But, what worked best for this novel was Christopher Vogler’s The Writer’s Journey. It’s an outline based on the “monomyth,” or the Hero’s Journey, by Joseph Campbell.

Some people say that using an outline is cheating, but in my humble, newbie author’s opinion, different tactics work for different writers. And, the sequence of the various stages of the Writer’s Journey outline can be shuffled at the author’s whim, so nothing is set in stone. I skipped one or two stages completely in Old Souls. If you think about it, without the monomyth movies like Star Wars, The Matrix, The Lion King, and Titanic would be a LOT different. And, probably not in a good way.

But, when I finally had the plot narrowed down, my characters began to run amok. Once again, I had too many ideas. Looking back, I imagine my confusion regarding who my characters were, and why they did things added another two years onto the completion of Old Souls.

Because my characters are immortal in their own way, I decided to pick a few ancient gods from different cultures to weave into the plot. Is this the “right” way to tackle character development? I’m not sure. But, it had a calming effect on me. Instead of feeling pressured to create people out of thin air, all I had to do was get to know the gods I chose to include in the story. Using gods as characters organically added another layer to my book, and I ran with the concept that many of the same gods appear in various cultures throughout the world because they are the same gods, reborn again and again into different civilizations.

The trick to writing my story has been to narrow the field of possibilities into what actually happens. This particular method for building characters won’t work in many other books, but, I’ll use a variation of it when the time comes. Many authors base their characters from real people, and there are a few characters in Old Souls who are loosely based on real people too. The “Heroes Journey” worked for me here, but it won’t work for every story. But, now that I have come to understand that I am a plotter, maybe my next book won’t take me six years to write.

How about you? Plotter or pantser?