Writing is a solitary effort. There’s no one to talk to at the water cooler. Finding other authors who have experienced the same things you are, who can prod you on when you need it, and shoot the $hi# on command, can make the process of writing a novel just a little less painful. Case in point: I recently had a venting session with one such friend of mine, and discovered something I hadn’t realized before. I am afraid of finishing my book. Sounds crazy, right? Having spent so many years on it, you’d think I’d be raring at the bit to set the thing free. But . . . I’m not. In fact, my writing output has slowed to such a crawl that the last three chapters have taken me five months.

Even that might not be so bad, if this wasn’t my second draft. But, it is. The bottom line is I should be moving along faster. I’ve talked about the importance of author swagger before here. But, you know what else is important? Finishing the goddamned book. Having something to back that “swagger” up. What’s stopping me from moving forward (you may wonder)? After talking to my friend, I realized it’s the fear of failure. I LOVE the idea behind my book. I love it so much that I feel like it could be really successful. I’ve created a world where I can add sequels and prequels my whole writing career if I wanted. But, as a new author, I’m also afraid that I might not write it properly: that I might ultimately fail the story. Instead of sitting down and typing it out, I’ve been distracting myself with Twitter, my Facebook Author Page, reviewing my critiquing partners’ submissions, and this very blog. Not mention my hellions . . . what’s that? The boys are trying to start a block of wood on fire with a magnifying glass? What’s that? The wood is attached to my HOUSE?? 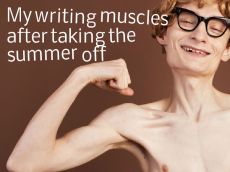 In the past few months, I spent the short eight weeks of hot(ish) weather Prince Edward Islanders enjoy playing with my kids and messing around with social media, and when I tried sitting down at my computer in the fall, I was SHOCKED at just how hard it was to type words onto my keyboard. Writing became painful. After a mere half-hour or so my brain actually hurt. When my writing muscles recovered from their eight weeks off, I found myself bungled by some rather unfortunate plot-holes. Then I started a new job. And, last week, I received a really, really great promotion. It’s a promotion so good that after years of contributing to the financial security of our household in bits and pieces, I am now in a position where I can earn quite a bit more. It means more money, more job security, and more hours. Which is great, not only for myself, but for my family. But, it’s not so great for my writing time.

Even though I’m happy with my promotion and the extra hours (and dollar dollar bills, y’all) that go along with it, and even though writing can be incredibly HARD, ultimately, writing is what I want to do. So now that I’m aware of what my brain is doing, that I’m subconsciously allowing myself to be distracted because of a innate fear that my book is going to suck and all this swagger will have been for NOTHING, what am I going to do about it? Well, I’m going to . . .

I’ve put myself in a time-out. It means I’ve had to make some of the same choices as countless other authors before me. The time has come to minimize critiquing my partners’ submissions. It means that if I want to finish this book and thrive in my new job, I have to quit everything that doesn’t really matter. I’m talking to you, social media.

So, if you’re looking around one day and wondering where I’ve gone, here’s the answer. I am writing. I have four chapters to go before I tackle some pretty big revisions and then try to grab an agent.

See you at the finish line.