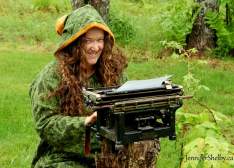 The best advice I’ve ever received about writing is just to write, and to read. The writing part’s up to you, but I’m happy to supply you with something to read, so here’s a fun experiment in throwing together a few characters who would never have met without a liberal twist in time…

The door flew open as if by magic. The paper bag enclosing the take-out in her arms crinkled as Candace shifted. No one stood there. The smell of hot cassoulet mingled with the scent of steamed brown paper.

Candace rolled her eyes and readied herself for whatever creeper was waiting inside the squat, grey house.

As she stepped across the threshold it looked as though she’d entered another century. The walls were painted dark colours and swaths of dried plants and roots hung from the ceiling. Strange contraptions popped and smoked at random. One or two rough wooden chairs offered the only comfort Candace could see.

She glanced back at her Vespa parked in the driveway, as if to reassure herself she hadn’t left her century behind.

It was mid-afternoon but the room was dark, the windows covered by three moth eaten tapestries. The first showed a wizard stalking fairies in a moonlit glen with a glittering net. The second depicted a knight releasing a woman who appeared to be on fire from a dungeon. In the last, the dungeon burned while the wizard looked out from the bars. The knight and the fiery woman rode off on a horse.

“Hey, your food’s here.” Were they waiting for her to rob the place? She had to admit the tapestries would hide the holes in the walls of her crappy apartment. “Is there anyone here?”

A wizard whirled around and stared at her with some surprise. An actual wizard. He had a grey beard that grew past a swollen belly and he wore a dark blue velvet gown with white stars printed all over it. In his hands were two beakers; one empty, the other half-full with a bubbling blue liquid.

He looked her over a moment. “Are you the cook’s daughter, then?”

“No, I’m the deliverance engineer.” She held up the package. “Your lunch?”

“Marvelous! You must have ridden the swiftest steeds in the kingdom to have arrived so quickly!”

There was a time when Candace may have warmed to a wizard; back when she thought LARPing and cosplaying was fun. These days she didn’t have time for that sort of thing. Wizards were frauds, magic was dead, and she was tough as hell. She spent her free time striking a punching bag she hung in her closet. She dyed her hair black and spiked it when the occasion called for it. Spikes were good. Spikes were the jagged shards of her broken life. She dressed in dark colours and had enough piercings to horrify the majority of the people she saw from day to day.

“Will you accept a gold sovereign my lady?”

Candace shook her head, the chain running from her nose to the top of her ear kissing her cheek with a cold touch. “I don’t carry change. Do you have any plastic?”

“If you remain and return with this unusual trencher to your master after my feast, the change is yours. I know life can be hard for peasants.” The wizard handed her an uneven coin of golden colour.

Candace stared at it, unsure if it was real and unwilling to bite it in case it was the dorkiest roofi attempt ever known. She decided she didn’t care if it was real or not. It looked cool. She pocketed the coin and handed the wizard his lunch.

She looked around the room. The only light came from a lantern perched on a wooden pedestal carved with runes. The lantern was built of filigreed pewter and encased in a strange, uneven glass. It looked old and expensive, but what was inside was far more interesting.

A tiny woman bathed in flame looked back at Candace. The woman put her palms on the glass. “Help me!” The flames that engulfed her flickered with orange and red.

Candace squinted at the creature. Were those wings? “Do you have a fairy locked in this lantern?”

“Hmmm? Oh yes, of course. A fire fairy, they’re the best for long term lighting.” The wizard held up the Styrofoam and tucked into his meal with his fingers. Bits of duck dribbled down his beard.

“Isn’t her habitat rather empty? There’s nothing but her in there and it’s so tiny. She doesn’t look very stimulated.” Candace didn’t believe in fairies, but she didn’t condone inhumane treatment either.

“It’s a fairy. Who cares?” The wizard continued munching at his lunch.

Candace frowned. The fairy’s flame brightened and she stared at Candace. “He put a spell on the lantern so that I can never leave.”

“Why not break it? Aren’t fairies supposed to be magic?”

The fairy shook her head. “It’s too powerful! It is twice as strong as a person’s power and three times as strong as their magic!” Her flame dimmed. “I am doomed.”

The wizard laughed. “You’re mine, fairy. After so many centuries, you should be accustomed to it.”

“I’ll never be yours, you ridiculous buffoon.”

“What if someone had no power and didn’t believe in magic?” Candace asked.

The wizard and the fairy, engaged now in some strange sort of staring match, didn’t answer.

Candace opened the door to the lantern, reached in, and pulled the fairy out.

The fairy blinked, her mouth agape, as she stared at Candace. “What magic you have in nothing!”

“Yeah. Whatever.” Candace resisted the urge to roll her eyes.

The wizard jumped to his feet. His cassoulet splattered onto the floor and along the hem of his gown. “What have you done?”

The fairy clenched her fists, her flame changing from orange to a deep and simmering blue. Candace could feel a fierce heat emanating from the tiny creature.

The fairy turned to Candace. “You should wait outside. I’ve some vengeance to take care of.”

Candace nodded, and stepped outside. She closed the door behind her and looked around. Her Vespa waited in the driveway. She drove it over to a bus shelter on the sidewalk nearby. She parked it there, facing the house, and waited.

She heard a lot of strange curses raging within, several crashes, and the sound of a large flyswatter in use. A bit of smoke hung in the air. This went on for several minutes, the smell of smoke growing ever stronger. Twists of smoke began to escape beneath the front door and a few windows that were cracked open. Soon she spotted flames licking at the tapestries.

A few people stood and watched with her until their bus arrived and whisked them away.

The curses stopped and the flames began to gnaw at the roof. It wouldn’t be long before it collapsed.

The fairy appeared and sat on Candace’s shoulder. She was breathing heavily, covered in soot and sweat.

“Done with the vengeance?”

The fairy held out a tiny hand to shake Candace’s. “Incendrance. Thanks for helping me, Candace.”

They stared at the fire a moment. “Too bad about those tapestries. They were kind of cool,” said Candace.

Incendrance grinned and they sat in comfortable silence a moment. From somewhere far off they heard sirens.

“Might be a good time to leave.” Candace sat on the Vespa and toyed with her helmet. “You got some place to go?”

“You can stay with me if you want.”

“Thanks.” Incendrance’s wings fluttered a moment. “Wanna go on a quest or something?”

“Sure, but let’s take the Vespa. I’m not a horse person.”

Thanks for reading, and thanks for having me here J. A. Allen!

and on her website, http://jennifershelby.ca/,  where you should definitely check out her book, The Incredibly Truthful Diary of Nature Girl, for the middle-graders in your life.

Thanks for sharing this great story with everyone here at Scribbles on Cocktail Napkins, Jennifer!

DID YOU KNOW: Jennifer Shelby won the opportunity to share her work at Scribbles on Cocktail Napkins by winning one of our Weekly Scribble Challenges. YOU can win the chance to guest post here too! The Sunday Scribble Challenge picks up again in September. Participation is quick and easy, and a great way to  interact with your writing peers. So, see you back in in September! Unleash your writerly self.

The winner of the last Scribble Challenge of the season has been named! Jennifer Shelby ROCKED the challenge with an imaginative, downright creepy submission to the prompt, “Your story is being told by an unreliable narrator. In less than fifty words, give your reader a clue he or she may not be telling the whole truth.”

The mob murmured and nodded, raising their torches. They set her aflame.

I drooled with desire for the intimate scent of her cooking flesh.

“How’d you know?” someone asked.

I shrugged, keeping my attention on the girl. They grow still just before they’re ready

Find Jennifer on Google+, Twitter, and her lovely blog, where she posts the most BEAUTIFUL pictures.

Thank you for participating in the challenge, Jennifer! I am honored to invite you to write the FINAL guest blog of the season. I can’t wait to see what you have in store for our readers.

To all other faithful #SSC participants, keep your eye out for a great new interview with winner Elizabeth Burgess on Writers Off Task with Friends, coming to the channel SOON!