No, I am not referring to a tale of two cities. I am referring to the last days of the school year. The time of year when it takes more than my usual powers of persuasion to convince my children it is bedtime on a school night when we all know full well that lessons are wrapping up and the sun still shines outside. But wrapping up does not mean over and it would seem my son’s teacher was not yet done with him.

The written word is a lovely form of communication under normal circumstances, but I don’t believe I can accurately describe exactly how hard I am laughing now at what would later be classified as ‘fun.’

The school would host an economic fair. Each student was then tasked with creating a product, setting a pricing strategy, and creating a marketing campaign including a sales poster. The only limitation was the products couldn’t just be bought and resold. They had to be painstakingly crafted. Okay, so the assignment didn’t specially say painstakingly, but this wasn’t my first school project – there would be pain.

2 weeks before due date

Kiddo, my eldest son, pondered and pondered what his product might be. “Bookmarks!” he declared.

Ah, the apple doesn’t fall far from the tree. “Okay, let’s make a prototype,” I offered. We flipped through a book of origami designs (a hobby of mine). “How about this one?” I asked, pointing at a fairly basic braid-looking design. Kiddo got to work while I tried making one too.

“That’s okay. That’s why we practice.” I picked up my bookmark. Though my fold lines were crisp and clean, the paper braid was already coming undone. There was no way the kids in his school were going to buy either sample. “Or we pick something else to try.”

Kiddo nodded, but promptly ran off and forgot all about it.

1.5 weeks before due date

I’d finished tucking in LT, my younger not-quite-school-aged son, and was coming to check in on Kiddo. Normally he reads to me before bed, but this time, rather than being in bed as I expected, I found him on seated by his father on the floor, engrossed in a library book on robotics. It was the picture of cuteness. What can I say? The geek flag flies high at our home.

1 week before due date

I came home to find an excited Kiddo and a functioning scrubber bot. Consider me shocked. I guess it was easy after all. “You are going to sell out of these.” I looked at my husband, who was as proud of himself as he was Kiddo. I guess they wouldn’t need me after all. “I hope you have enough parts,” was all I could say.

And parts they had. Our dentist office donated toothbrushes. Our friends and family donated old phones. Soon my dining room table was covered in bits of scrap paper, wires, and electrical tools. The Potts guys had taken the assignment and run with it. No mom required. A first. Not wanting to stand in their way, I went out and purchased poster supplies.

48 hours before due date

The glue on the poster proclaiming the availability of the next must have toy of the century had long dried when the tone in the dining room shifted. A series of unfortunate events during assembly had rendered more than half the components non-functional. We learned the hard way that while there are half a dozen arts and craft stores within a five-mile radius, there are very few places to purchase electrical components except online. It’s almost as if there isn’t a market anymore for tinkers and hobbyists.

14 hours before due date 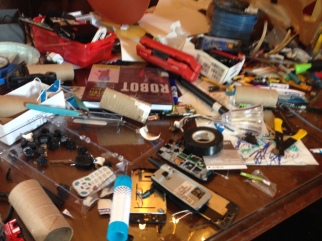 Kiddo greeted me at the door. “We’ve decided we need to come up with something else.”

Navigating my way through the debris that was once my dining room table, I found the hubby scrolling through Pinterest. Stand aside soldier, I thought. We’ve long since passed the point of Pinterest. Jumping to my barked orders, the poster board was cleared as Kiddo changed his branding and slashed his pricing strategy. Googly eyes, plastic cups, and bits of wire shaped by Kiddo’s hands, becoming Helper Holder Bots (for those times you need to keep your toothbrush out of the sink).

Would this be a thing of engineering wonder? Absolutely not! But failure was not an option. Not today. Not on my watch. Kiddo would have a product and it would be ready for the fair on time, and he’d learned more than a lesson or two beyond basic economics.

And last, but far from the least, never, but never, forget to appreciate your mother (or father). They’re doing the best they can.

When you are just over five foot tall you learn quickly how to appreciate the little things in life.

A self-professed geek and author of An Uncertain Faith, a women’s fiction novel, and The Fair & Foul a speculative fiction novel, Allie Potts also writes at www.alliepottswrites.com on topics such as the joys and challenges of being a working mom and growing as authorpreneur and the occasional bit of fiction, tip, or non-review review, but mostly about life lessons gleaned from everyday experiences.

Books are available at www.amazon.com

Allie won the opportunity to guest blog on Scribbles on Cocktail Napkins by winning one of our Weekly Scribble Challenges. YOU can win the chance to guest post here too! Just click #SSC on the toolbar above to check out the prompt for this week’s challenge. Participation is quick and easy, and a great way to  interact with your writing peers.

Flash fiction challenges fuel creativity. They’re a relatively painless pool for writers who’ve never posted their work to wet those feet, OR for established authors/bloggers to pick up a few new readers.

So, what are YOU waiting for? This week’s challenge wraps up Saturday. Unleash your writerly self.